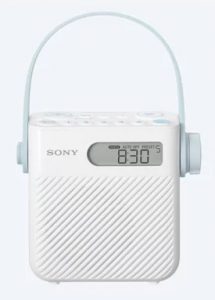 The Sony ICF-S80 is a stylish and slick shower radio intended for use in the bathroom or by the pool. The ICF-S80 is regarded by many as the best shower radio - and we agree. Read on to find out why.

Some of us like a relaxing shower with absolute silence. Others sing in the shower as a meditation. Maybe you’ve gotten complaints about your off-key vocalizations in the shower or maybe you sing like an angel. Nevertheless, chances are you’ll have had the thought of listening to music in the shower.

Normally, it’d require having a Bluetooth speaker in your bathroom or playing music through your phone. However, the humidity is bad for a lot of Bluetooth speakers and the volume playing from your phone isn’t gonna cut it when the water is rippling.

Times have changed. As a new trend, we’re seeing all kinds of music devices intended for use in the shower pop up. This includes the Sony ICF-S80 shower radio.

With the Sony ICF-S80, you can listen to your favorite radio channels while the water is running without having to worry about ruining the device.

Sony is known for creating high-quality technology. With the ICF-S80, Sony did a very great job as far as the radio reception goes. You have the option of listening to both AM and FM radio bands.

One of the most common issues with shower radios is poor and/or unstable reception. With this model, you won’t have to worry about that issue at all. When putting this one to the test and comparing it with the competition, we found the overall radio listening experience much smoother and stable on the Sony ICF-S80.

If you’re prone to busy mornings, you don’t want to waste precious minutes trying to desperately tune your shower radio into the right radio station. Out of the box, the Sony ICF-S80 just works!

If, however, the reception is poor, there’s plenty of things you can do to improve it. For one, this speaker has a built-in antenna for AM radio that you can use with ease. This is something the competitors lack.

Most shower radios are geared with a suction cup. The Sony ICF-S80 comes with both a suction cup and a detachable rubber handle. This gives you so many more placement options.

Personally, I like hanging it on the luminaire. I’ve also had previous issues with suction cups on other shower radios that kept falling down or had trouble attaching to the surfaces in the shower.

A Shower Radio, Not A Bluetooth Speaker

While a lot of the other shower radios have a “Bluetooth speaker” approach, it is clear what the intention Sony had when they created the ICF-S80. They wanted to create a solid radio for use in the bathroom. Something with a stable reception and a minimalistic design.

Therefore, this unit does not have any type of Bluetooth option. You cannot connect your phone to it and play your Spotify playlist.

As Sony went for a more classic radio design, this unit is geared with a clock display. This allows you to see what you’re doing. You can set and see the clock, see which radio band you’re on or see the radio frequencies as you scroll through various radio stations.

If you’re looking for something with a display that gives you a clear overview of what you’re doing the Sony ICF-S80 is the right choice for you.

Energy Efficient To The Core

The Sony ICF-S80 works a little differently than most competitors when it comes to power. While most other units are charged and hold up to 10 hours per charge, this shower radio uses R14 (size C) batteries. This means that the Sony ICF-S80 can play for up to 100 hours.

If you hate charging your devices ever too often, then this unit is ideal for you.

Additionally, the ICF-S80 has a nifty Auto-Off functionality. If you forget to turn it off, it’ll automatically detect it and shut itself down. This can save you lots of energy on busy mornings in the long run. You can even set a timer for it shut down if you want.

Again, these are features that the competition simply doesn’t have. They only do what’s needed, the Sony ICF-S80 does more.

Now to what I’m sure you’re most interested in. The audio quality. How does this shower radio perform compared to the competition?

If you’ve owned previous audio products from Sony, you’ll know they’re synonymous with quality. This unit is no exception to that.

We did a blind test with the ICF-S80, the Hydro-Beat, and the Hromen shower radio. Our three test persons had to listen to the same FM radio frequency on all three units and identify which they think sounded the best. All three opted for the ICF-S80.

The audio reproduction is very balanced with this unit. With a frequency response from the speakers from around 110 Hz – 22 kHz, this speaker greatly surpasses the competition. Especially the high-end frequencies were impressive.

If you want nothing but the best, our conclusion is that the Sony ICF-S80 is the best shower radio you can get.

SoundWiz is a participant in several affiliate programs. We may get paid when you click on external links. Read more here.