8D audio is the new kid on the block when it comes to immersive music. It first appeared a couple of years ago on YouTube and ever since those first few tracks were posted online, more and more people have started to pick up on the growing trend.

Listening to 8D audio puts you right in the center of the action, giving you that euphoric feeling of being surrounded by the music. The vocals, beats, guitars all seem to move around your head from side to side, back to front and, for some, it creates an out of body experience unlike anything heard before.

The Rise of 8D Music 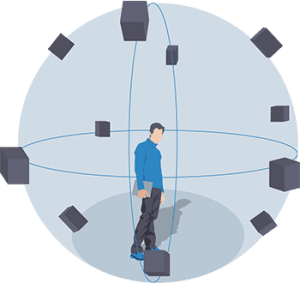 A quick search on the internet will pull up many 8D audio tracks with the majority being found on YouTube. The popular channel, 8D TUNES, has racked up close to 5 million subscribers and includes plenty of different genres to keep you entertained. The quality of these 8D songs are a lot higher than most, but in all fairness, this style of music is a fairly new concept.

The people who are producing these songs, mainly sound engineers, are learning as they go. Finding the right balance of movement and atmosphere in 8D audio is subjective, with the final mix often coming down to how each person interprets the song. We believe that the quality of these 8D songs will only get better, and it’s exciting to think of how they will be implemented with future technology. The combination of 8D and VR is the obvious stepping stone as they would complement each other perfectly.

Just to make sure that we are all on the same wavelength, we should point out that the 8D term itself does not actually count for much. The world that we live in can only ever be three dimensional (3D). There are a few suggestions as to why it is called 8D. Some have said that it just sounds futuristic and others have mentioned how the sound is channeled from eight different directions (left, right, front, back, front left, front right, back left and back right), but none of these suggestions are conclusive.

Strangely, you can find 7D, 9D, 10D, and even 11D music. However, the numbers are purely down to marketing execs looking for new slogans to attract customers. The facts come down to that although 8D audio feels like it is revolving and moving around, it is actually still 3 dimensional. We’ll explain exactly why and how in the next section.

How Does 8D Audio Work?

First off, the technical term for 8D Audio is actually known as Ambisonic Audio, a technology that was first developed in the 1970s to improve the VR experience. It consists of a technical process whereby you record audio within a virtual spherical dome and split the output results through L and R channels. This is a very simple description of the process and there is a lot more to it than that, but for now, we’ll carry on and stick to the 8D terminology.

So, how does 8D audio work exactly? Well, for you to better understand we’ll revert back to the comparison of 3D audio. You will find that both styles of audio are designed to manipulate the sound to feel as though it is coming from multiple directions. However, 8D audio takes the process one step further by dynamically moving the source of the sound around the center point, whereas the source of 3D audio is fixed and stays in one position.

The ability to create this dynamic sound source is made possible by using binaural processing. Sound engineers use this process by recording sounds through two mics that are positioned to replicate our ears, the illusion of direction is then achieved by altering the delay of each sound as it reaches the two mics. A perfect way to understand this process in action is by listening to the viral “Virtual Barbershop” audio on YouTube. Make sure to wear headphones and you’ll feel as though you are sitting right there in the barber’s chair. You need to hear it to believe it!

Nowadays, the sound engineers who are trying their hand at 8D audio are learning quickly and using various techniques and effects to improve the end result, however, it should be noted that some engineers are more adept than others. A lot of the early 8D tracks seem to just pan left and right, and we can assure you that this is nothing new and should not be classed as 8D. However, as mentioned earlier, there are one or two channels on YouTube that have plenty of high-class, 8D audio mixes. You can see that some of the better quality videos have millions of views. These are the tracks that you want to be listening to for a true 8D audio experience.

The Future of 8D Audio

Just exactly where 8D audio will end up in the future is uncertain. It’s still in its early phase and the true potential is still unknown. The sound engineers who are testing the waters with 8D are still learning how to optimize the process, so it is exciting to think of what they might produce in the coming months and years. However, 8D audio is limited to the extent that you do need headphones for the effects to work. It’s simply not possible to enjoy 8D music with conventional speakers but who knows what the future will hold?

Virtual Reality is the one area where 8D audio could be used effectively. Audio sounds that react to the movements of your head would open up a whole new realm of VR. Imagine immersing yourself in a virtual concert environment with 8D sounds swirling around, it’s something that we would love to experience one day, that’s for sure!

The Most Popular 8D Music & Songs

There are many 8D songs available and they all come in varying levels of quality. As mentioned, 8D TUNES is by far the most popular YouTube channel so we’ve picked out some of their top songs:

8D audio has certainly caught the imagination of the public, you can tell that by the millions of subscribers and views on YouTube. It seems that this new way of experiencing music is giving people a chance to sit back and escape life’s problems for a few minutes at a time.

The need for headphones and the lack of song options does limit the potential of 8D for now. However, given that this style of music can only be experienced alone then we think the whole headphone thing shouldn’t really be a major issue. In terms of song availability, there is no doubt that more songs will be made available, but we should respect the fact that creating 8D audio is a technical process. We shouldn’t expect there to be thousands of songs available overnight.

YouTube 8D channels are rare and this points to the fact that the process is not an easy one, with only the experienced sound engineers being capable of creating true 8D audio. It’s fair to say that this is a specialist skill and that brings a lot more value to this new and exciting style of music. All in all, the potential of 8D is huge and we can’t wait to see (and hear!) what happens if it does team up with VR technology.